The word Cinque is Italian for five and only five of these cars have been made and it’s a breathtakingly beautiful sports car that is individual and original in every aspect.

The project to have this car commissioned was not by the government – as the 5 a day ‘fruit and veg’ were; these cars were especially requested by a Pagani dealership in Hong Kong. The Cinque originates from and has been designed in Italy!

This Zonda Cinque is a car to admire and is refined to the point where even the bolts have the Pagani logo on them.

If you’ve bought one of these cars (5 have been produced and already sold) it would have cost you approximately £1million to £2million and you will be known for having a taste in cars! This car has a beautiful look to it with the body to match and two doors as standard. There is a long spoiler on the front, with extra air-intakes around the body of the car and twin xenon headlights on either side! There are also grills on the face and in-built fog/sports lights adding to the spice factor of the car. The front apron of the car is curvaceous as are the wings of the car.

The arches around the wheels are prominent and the shape of the car is completely aerodynamic. This car is reminiscent of a mix between the bat-mobile and a Formula One car. The Zonda company has a reputation for flare and excellence and the Zonda Cinque keeps appearances up! 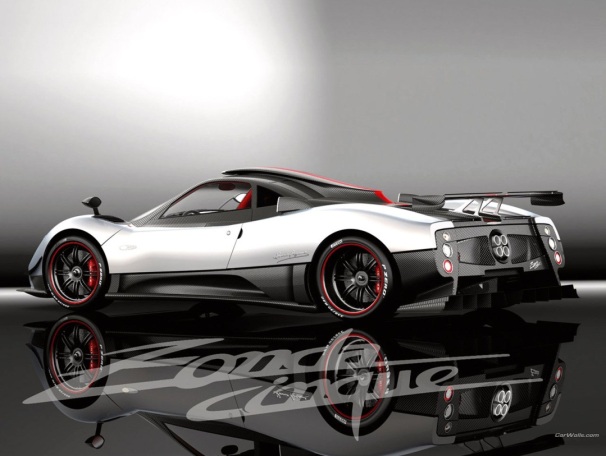 The Zonda Cinque is explosive on the race track and is responsive in every aspect with built in features to keep the car on the track and sounds far from passive, it has a rear spoiler so that down force is present. The Cinque has racing features of gear paddles along with a gear stick, it also allows for quicker gear shifts without engaging the clutch. The suspension is adjustable and can be customized for the track and is made from titanium.  The seats are made from carbon fibre and have a racing sports style leather cover. The colour scheme and style are already chosen for the Cinque and they have their own combinations to make the car look trendy, sporty and uniquely extravagant.

The Interiors has racing leather seats – safety enhanced seat belts with the additional safety of steel roll-bars, the interior is lovely and has character and is evidently sporty. A unique selling point of this car is that it is made from a special fibre – carbon titanium – especially made for the Zonda Cinque.

The engine in the car is a Mercedes Benz AMG V12 with 678hp the car also has a four circular pipe exhaust as a dizzying trademark feature of the Zonda alongside vertically placed rear lights. The wheels on the Cinque have been made with aluminium and magnesium and have Pirelli Pzero tyres – 19” on the front and 20” on the rear are available.

Horacio Pagani is the name of the founder of the company that begun in 1992 (Pagani worked with the team that designed the Diablo, the Lamborghini P140, the L30 and the Diablo Anniversary.) It has been announced that the Zonda Cinque is a 2009 release and the Cinque Roadster is said to be one of the world’s fastest convertibles- there were 95 Zonda’s produced in 1999 and are known as the original Zonda. The Cinque is an upgrade and does 0-60mph in 3.4seconds – at 9.6second the car reaches 125mph and its top-speed is an impressive 217mph. You could visit the website for more information on the Zonda Cinque : http://www.paganiautomobili.it/default.htm.