BMW Launched the i family concept cars in July at Frankfurt, Germany. Above is the BMW i8 an eco-friendly alternative and a visionary car for the future! BMW are showing that they are leading the way in electric cars for the future.

The BMW i8 has the trademark kidney grills and the concept model has a futuristic blue colour behind these grills. The production model which is arriving in 2014 is said to look like this :

BMW have not let on to what the car will look like in its production form although there has been talk of some parts being modified and according to Adrian van Hooydonk, Senior Vice President of BMW Design, those oh-so-low side windows probably won’t make it to production, but the design team is intent on bringing as much light into the cabin as possible – on the i8.

BMW have managed to conjure up a green process for the production of these cars – every aspect of the process has been green from the factory output to the recycled materials used.

This image shows the extent to which BMW are manufacturing Carbon Fibre Reinforced Plastic into their i cars which carry the slogan of “BMW i – Born Electric”. This referrs to the other BMW too which I have not mentioned the BMW i3.

The i8 has two drive systems one is the electric motor and the other is an internal combustion 1.5litre engine which runs on petrol although there is talks of BMW changing the latter to gasoline – either way the i8 is certainly a hybrid for the future to look out for. The prices being predicted are around $300,000. The petrol engine features at the back of the car and the car does 0-62 in 4.6 seconds. The top-speed is 155mph  (as this car is restricted to this speed).

The car is a four seater and has an all wheel drive – as BMW have said: “All four wheels of the BMW i8 Concept can be driven at the same time, similarly to an all-wheel-drive vehicle. This solution combines the driving dynamics advantages of front-wheel drive, rear-wheel drive and all-wheel drive. An optimal drive configuration can therefore be provided to suit all driving situations”

BMW also had to say the following on the design of the BMW i8 – “The design makes the customer a promise of quality that the product experience then keeps. The design of a vehicle shows customers at first glance what they will experience once they get behind the wheel.” (Adrian van Hooydonk, Senior Vice President BMW Group Design). 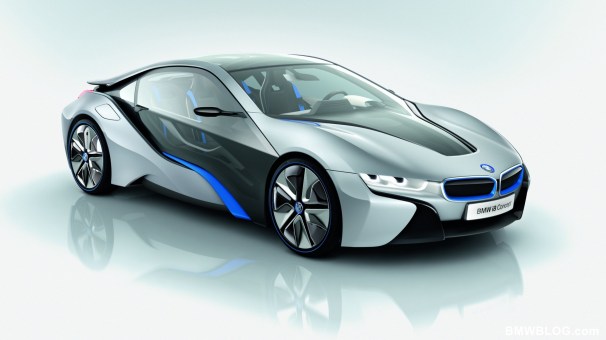 The design is aesthetic and it has striking gullwing doors which add to the cars futuristic features – and BMW will be hoping for it to be the essence of the future. The design is being hailed as a first by BMW who have said that this car is far lighter than its electric counterparts due to the majority of the body being built from carbon fibre reinforced plastic – which happens in a green factory which is soon to have windmill turbines as has been proposed by BMW so far – (so green!). The car is certainly aerodynamic as BMW have incorporated this as a key element in their design – making this an electric sports car!

“The LifeDrive architecture of the BMW i8 Concept has been carefully adapted to enhance the vehicle’s sports car character, and therefore to deliver unbeatable performance and excellent driving dynamics. The motor in the front axle module and combustion engine at the rear are connected by an “energy tunnel”, which houses the high-voltage battery. This gives the car a low centre of gravity – and the dynamic benefits that come with it. The positioning of the electric motor and engine over their respective axles and the space-saving and well-balanced packaging of all components result in an optimum 50/50 weight distribution.”

As well as making headlines the BMW i8 will be featuring in the yet to be released Mission Impossible film, called Ghost Protocol. As for the dimensional specifications the i8 Concept measures in at 4.6m long, 1.9m wide and 1.2m tall. 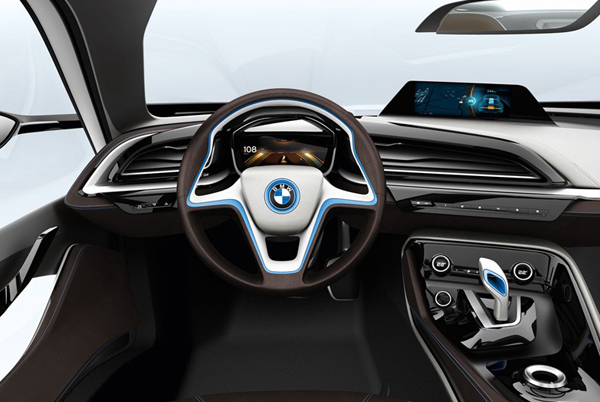 As for the interior the designers at BMW have looked at minimising the materials within the compartment and maximising space. The steering wheel and its counter-parts look sleek and futuristic – and are mostly made from carbon fibre re-inforced plastic – BMW have included their very own i systems which control and display certain functions of the car such as SatNav and Power.

“The sporting character continues into the interior. Boasting a driver-focused environment unmatched by any BMW Group vehicle before it, the BMW i8 Concept immerses the driver fully in the unique driving experience. The BMW i8 Concept is the sports car for a new generation – pure, emotional and sustainable”.

The following video provides key interviews with BMW’s i8 staff:

For  more information see below:

Here’s a video on BMW’s other electric hybrid cars:

One comment on “The BMW i8 – Concept Sports Car”