The Swaraj Brand, Mazda and Punjab Tractors Ltd have been around since the beginning of the Indian Automobile scene; selling Tractors and vehicles such as Ambulances, Police carriers, Water Tankers, Buses, Trucks, and special vehicles such as Harvesters, Orchard Tractors, Tourist Buses, Rail Track Inspection Vehicles, Fork Lifts and Crane Vehicles.

As for Swaraj and Punjab Tractors Ltd they have a rich history:

Punjab Tractors limited was promoted by the Indian Government’s department for Industries and Commerce – PSIDC (Punjab State Industrial Development Corporation)  as one of its projects in 1970 for the manufacturing of agricultural tractors, its objective was to promote new industrial projects in the State of Punjab. Swaraj tractors conceived in 1965 by a team of dedicated engineers and scientists working at Central Mechanical Research Institute.

“The Unit went into production in 1974. The tractor was based on completely indigenous design and was the result of six years of design, development and field proving effort at the Central Mechanical Engineering Research Institute (CMERI), a national laboratory under the Council of Scientific and Industrial Research (CSIR) of the Government of India. The group of design engineers, who had developed the first model at CMERI, were later transferred to Punjab Tractors Limited to commercialise the product.”

In 1983 the Swaraj design along with its promoter Punjab Tractors Ltd who now owned Swaraj (since 1970), went into a financial collaboration with Toyokogyo Ltd, a company from Japan which was now working with PTL to manufacture light commercial vehicles; the name Swaraj Vehicles Ltd was formed.

A year on (1984) was a time for a Joint Venture (JV) which occured between Punjab Tractor Ltd, Mazda Motor Corporation (Japan) & Sumitomo Corporation (Japan). Swaraj Vehicles Ltd was renamed Swaraj Mazda  Ltd. This JV’s commercial operations began in 1986 and by 1987 the JV produced and introduced an indigenously developed bus. Swaraj and Punjab Tractors Ltd had forged an alliance with Mazda in particular and this saw them working together in an alliance which has seen much success until 2009.

Between the years 2004 and 2009 there was a drift between Mazda and Swaraj as both companies had their own agendas – for example Swaraj were focusing on Swaraj tractors, Swaraj engines, Swaraj Automotives and Swaraj scooters, whereas Mazda were looking to focus on passenger cars.

In 2004 Mazda withdrew from its partnership with Swaraj and since then this has seen Swaraj have a couple of name changes from Swaraj Mazda to – Swaraj Buses and Trucks Ltd, this indicated an end to working with Mazda (who ceased to be a shareholder in 2005). Mazda however gave the go – ahead initially to Swaraj to continue using their name without any royalty fees till 2007.

The Mazda Motor Corporation later in 2007 also notified Swaraj to not use their name in alliance with Swaraj Enterprise and thus the company name that used to be Swaraj Mazda was now going to be called Swaraj Vehicles Ltd as agreed by the board of directors this however was contested by the other shareholders such as PTL and did not go through. Swaraj no longer used the name of Mazda in their title.

Punjab Tractors Ltd were now without their main partner and a lot of speculation surrounded the Swaraj brand, with links to a TATA take-over, this didn’t happen instead Mahindra Tractors had made a smart investment in 2008 which saw them buy all of PTL’s remaining shares in Swaraj.

This investment by Mahindra saw conflict over the use of the Swaraj name with Sumitomo who had purchased a 41% controlling stake in Swaraj Trucks and Buses Ltd (Swaraj Mazda) from Mazda in 2005, the Sumitomo Corporation purchased PTL’s remaining shares in Swaraj Trucks and Buses Ltd (Swaraj Mazda) in 2009; Mahindra and Mahindra along with PTL took the case to court whereby Sumitomo were ordered to continue using the name for a further two years only – in 2006 Sumitomo hooked up with Isuzu motors and in 2010 Swaraj (Swaraj Mazda) became SML Isuzu Ltd this was one year before the Sumitomo Corporation were ordered to stop using the Swaraj Brand name.

Today there is speculation that TATA are looking to buy a 50% or more stake in SML Isuzu.

“The combination of Swaraj’s longstanding reputation with our cutting edge design and manufacturing has made the name Swaraj synonymous with power, reliability, and expertise.  We enjoy a market share of nearly 12 percent and a community of more than 700,000 satisfied owners in India alone.  We bring our customers excellent tractors and product support at 600 dealerships across India.  We are 2,100 dedicated, highly trained, and customer-centric employees working to bring you the best in farming equipment and customer support.

In addition to our strong presence in India, Swaraj tractors are used across the world in the US, Nigeria, Zimbabwe, Tanzania, Nepal, Sri Lanka, Bangladesh and Ghana.  In each region we enter, we seek to provide farmers with tractors and implements precisely suited to their agricultural conditions, helping them maximize their prosperity.”

“We feel honored to get an opportunity to introduce our brand SWARAJ to you. SWARAJ was India’s first indigenously designed, developed & commercialized tractor manufactured by erstwhile Punjab Tractors Limited (PTL), a company promoted by Punjab Government. In 2007, PTL was acquired by Mahindra & Mahindra, one of the world’s largest tractor manufacturers. Mahindra & Mahindra is a leading Indian business conglomerate with group revenues of $ 6.7 billion. Mahindra & Mahindra, Farm Equipment Sector, of which Swaraj brand is now the part, has the distinction of being the only Tractor Company in the world at present to have received two of the world’s top most quality prizes i.e. Japan Quality Medal and Deming prize. We have a tractor portfolio of 9 models with more than 100 variants in the range of 22 HP to 75 HP. We have a strong domestic presence with more than 0.7 million satisfied customers. Swaraj tractors, ruling the rural hinterlands for more than three decades, are synonymous with power, ruggedness & reliability. We have also expanded our presence in the overseas markets including select African and SAARC nations.”

As you can see – the Swaraj brand has a long-standing history with many companies trying their utmost to keep this brand to themselves – however Swaraj has withstood the test of time and is still continuing to operate as an Indian brand name and company which exports world-wide and to many developing countries and also America.

“In Hindi, the word “SWARAJ” means freedom from bondage – and self – rule. Since P.T.L. was the only first largest tractor project in India, moreover fully based upon Indian technology. So SWARAJ was appropriately chosen as its brand name. SWARAJ group sells its products under this same brand.”

“With more than 2 lacs of tractors and harvesters combines operating in Indians farms, SWARAJ are now well-established brand name in the country.”

(Same source as above)

The Original factory where the tractors were built by Swaraj and PTL is at S.A.S Nagar – Punjab in the City of Mohali. The factory was one of its kind in the industrial town which is 5km away from Chandigarh. The Tractor factory was the beginning of this town.

“A Tractor is a self-propelled vehicle capable of pulling a load. It is usually powered by an internal combustion engine, and is used on highways and in factories; but its greatest use is on agricultural land. Tractors can be classified according to their main functions such as farm tractors, industrial tractors and highway tractors. The farm tractor has revolutionised the mode of farming wherever it has been used. It has relieved farmers of arduous work and made great increases in production possible. Through the use of the tractor, farmers can control power that is equivalent to many horses and men. The average man is rated at 1/10HP, but when he drives a 20HP tractor across his fields – he is doing the work of 200 men. Tractors are used for a variety of purposes such as ploughing, harrowing, sowing, harvesting, pumping and transporting.”

“These tractors have contributed significantly to the green revolutions in India. Tractors are also being exported to a number of developing countries.”

It is the farmers that are the most important to the country and the alliance between Swaraj and Mahindra has seen the farmer benefit not only through the use of the tractor they purchase but also in the way they make the purchase; Mahindra Finance has been providing customized loans to farmers and as a result this has helped India; in 2004 a memorandum of understanding was signed by the Syndicate Bank and Punjab Tractors Ltd (Swaraj) to provide finance to farmers who purchased Swaraj Tractors – where the bank would finance 95% of the farmers costs and the farmer would have to finance 5% themselves. This is just an example of how banks and Swaraj have been operating – there are other similar agreements between banks and Swaraj too depending on the state and banks of India.

The Swaraj tractors have certainly been effective in India and World-wide and the company will only look to grow further in the tractor and automotive industries. Swaraj has been doing much for India and its development and its operations in developing countries is helping to raise the standards of World development. To conclude Swaraj has survived through a lot and many evolutions along the way and has always adapted and evolved – it is truly one of India’s pioneers and has shown this through many decades – they will want to continue doing this throughout the future too.

I’ll leave you with the quote from one of Swaraj’s adverts : “Swaraj Tractors – Kissan Ka Power, Desh Ka Bharosa!” – Which translates to Swaraj Tractors the Farmer’s Power and the Countries’ Trust!

“In 1974 it went into commercial production with SWARAJ 724, 26.5 bhp as its first model. During its 38 years of production, it has not only expanded its manufacturing capacity to more than 24000 tractors per annum but added more products into its manufacturing range.”

Its product range includes the following (FE – Is the vehicle specification given to denote it is a tractor/truck/lorry (tractors are under the heavy vehicle category and could also denote Fuel Economy):

Here’s a timeline of the key dates and what happened at these times in Swaraj and Punjab Tractors Ltd history. 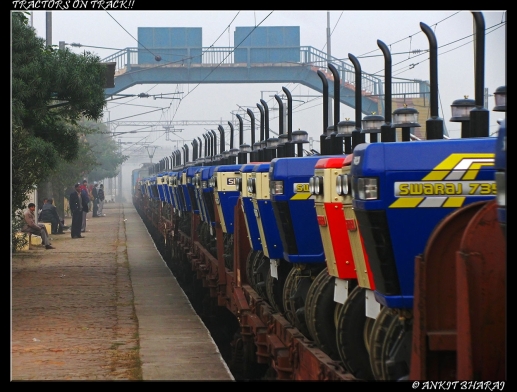 The major manufacturers of tractors in India are:

Special Features of Swaraj Tractors at the time of writing include:

You can also visit: http://www.indianmirror.com/indian-industries/tractor.html for an insight into India’s Tractor Industry.

There are still some serious issues being looked at, and to be resolved for farmers such as how to economise on fuel (through the effective way of changing gears at the right time), research has shown that many farmers spend a lot on the cost of fuel for their tractors and there is a need for support for the farmers with the help of efficiently economising their fuel consumption – research is ongoing as how best to support farmers, such as through the use of digital technology to inform the tractor driver as when to change gear. Another issue which is ongoing research at the time of writing is the dangerous vibrations being sent from the tractor to the driver and the threat it poses to the drivers head. Lastly it is important to stress the importance of farmers, tractors and agriculture, here’s a quote from the above website: “India is an agrarian economy and so mainly depends on agricultural produce. As a result, tractors play an important role in the growth of the economy itself. Tractors help farmers increase the output and in turn help the economy to grow further.” 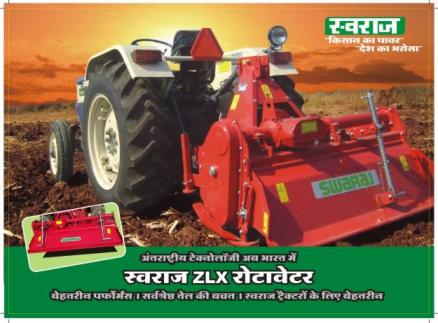 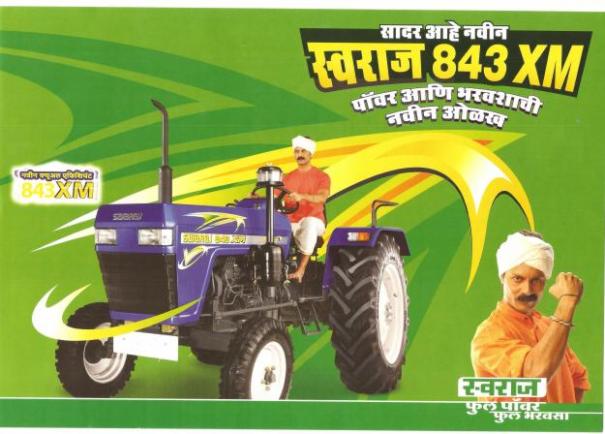